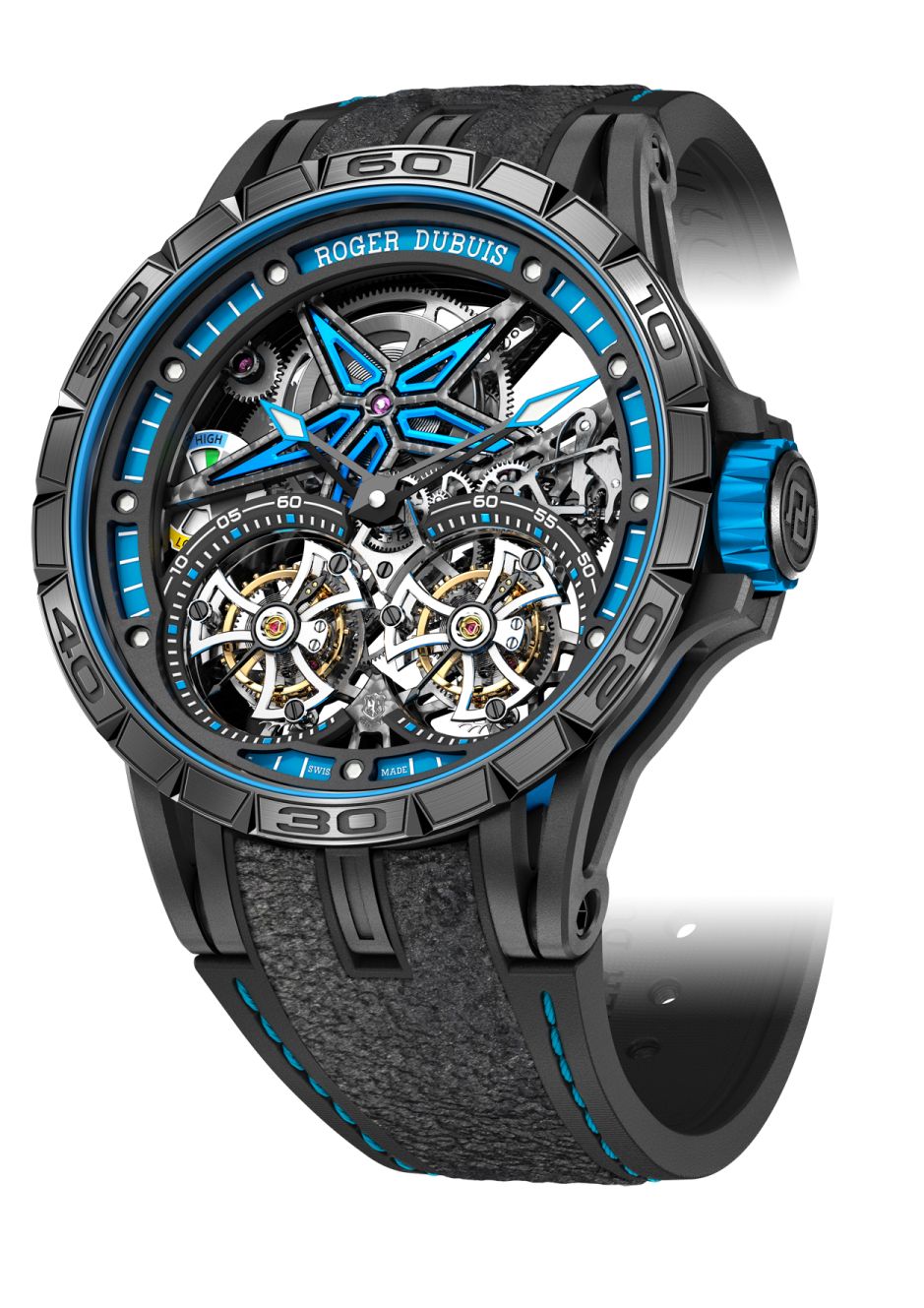 This year Roger Dubuis on SIHH (Salon International de la Haute Horlogerie)in Geneva 2017 represented the new line of the Excalibur watches with blue twist. For lots of people the favourite of the blue rhapsody line is the Excalibur Pirelli Spider Double Flying Tourbillon, which came out as a result of the partnership with Pirelli (world famous high performance tyres producer).

This collaboration gives the opportunity to  his costumers to wear a wrist watch with strap made of the actual rubber from Pirelli tyres used in actual races, although some Formula 1 lovers think that the Pirelli tyres have been such an issue during the last couple Formula 1 sessions, so they wouldn’t consider this such a great thing. 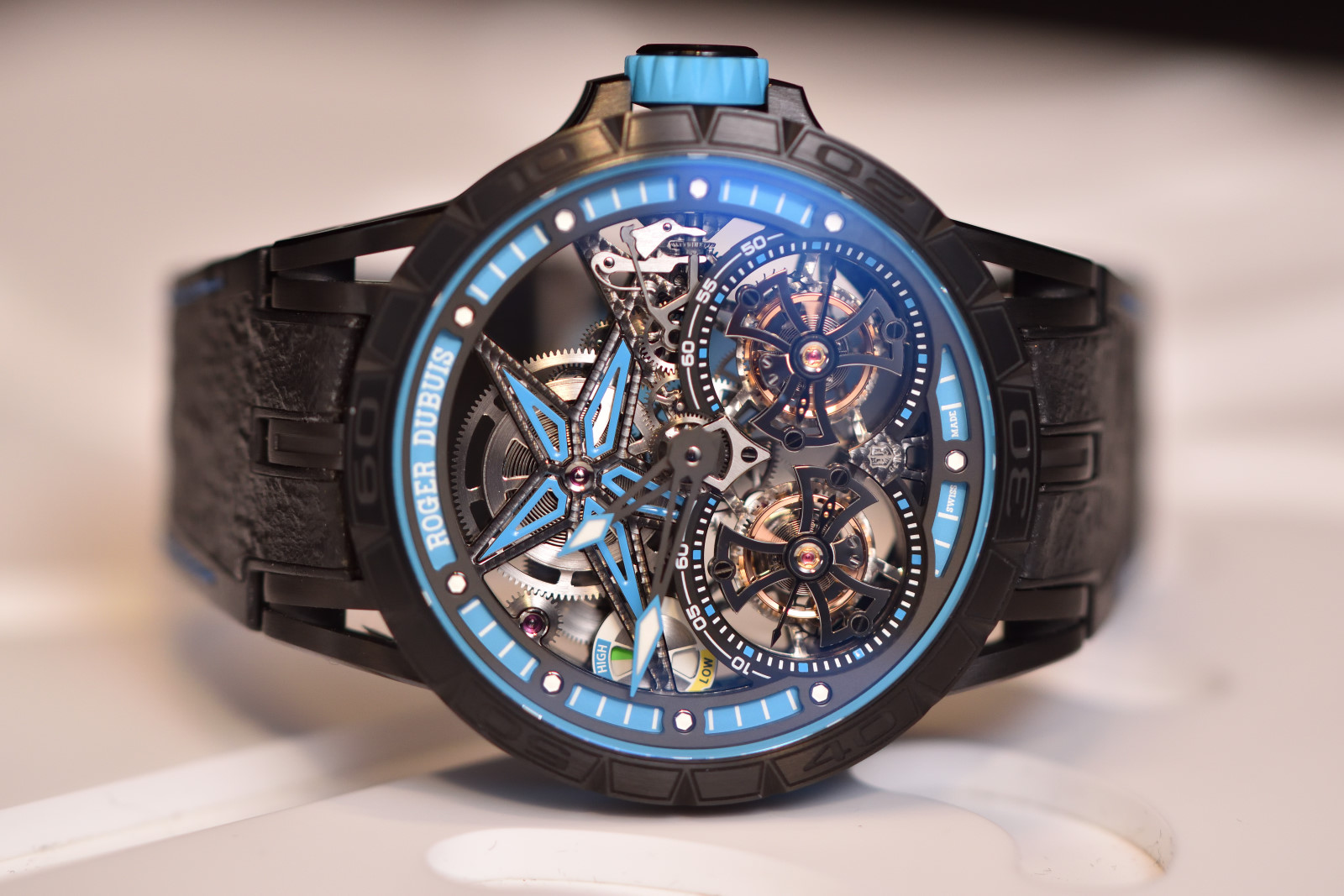 The Excalibur Spider Flying Tourbillon features a 47 mm skeleton case with black DLC titanium graduated bezel and case back. The Blue vulcanised rubber cover over the middle case and the rubber blue vulcanised ring added on the surface of the crown shows that Pirelli tyres are not used only for the strap. The case is quite tick measuring 14.95 mm in thickness, but even with this dimension is quite light  and wearable thanks to its titanium case.

Heart bitting elements that we can’t avoid not to talk are the Double Flying Tourbillon with carriages are placed one next to another (both also serve as sub-seconds registers and are surrounded by seconds tracks whose design is inspired by speedometers) and a skeltonized mainspring barrel with the iconic Excalibur star on top. 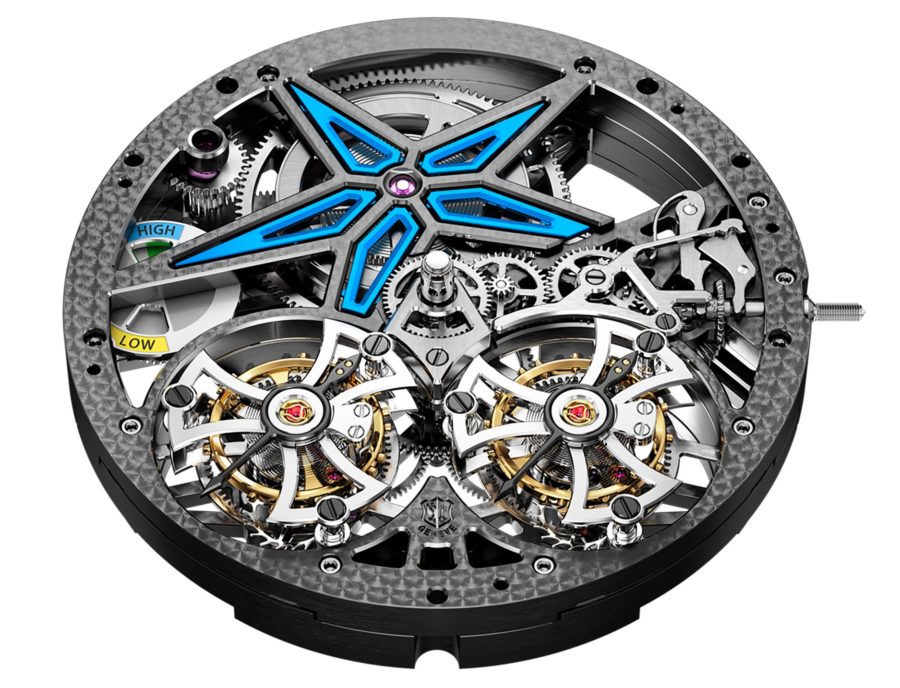 The 4Hz self-winding movement (Calibre RD105SQ) – with micro-rotor is composed of 365components and 49 jewels , all of them hand-finished in accordance with the quality criteria of the “Poinçon de Genève” certification. The power reserve indicator at 9 o’clock resembles racing car fuel gangues and shows power reserve of 60 hours. The blue on this watch matches the blue utiliser on intermediate Pirelli tyres during Formula one races.